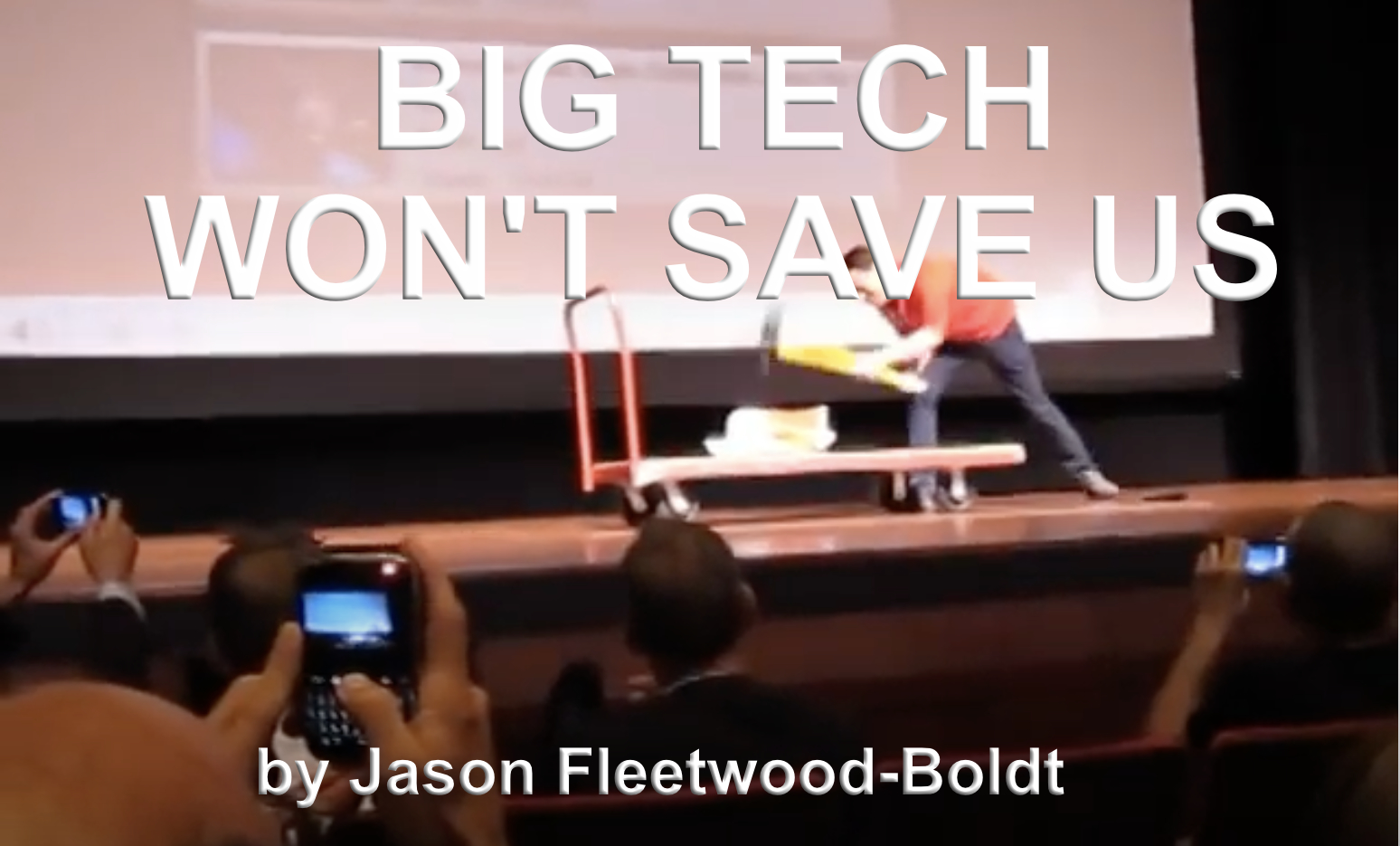 I was in the audience at the New York Tech Meetup on June 15, 2010. That was the night that Scott Heiferman smashed an iPad with a sledgehammer.

He told us he would. At first, he got a lackluster response of disbelief. So Heiferman dragged it out.  He proceeded to carefully wrap the iPad in a piece of moving cloth (to protect us from the shattering glass), then paced back and forth on the stage.

He taunted us. Would he really throw away $800 just for an abstract anti-authoritarian demonstration? (He was calling out the insidiousness of tech and the magnificent position it had put him to afford to throw away $800 so casually.)

Audible shrieks and gags were heard as he brought the sledgehammer down. Inside the filled 900-seat NYU Skirball auditorium, you could feel the crowd’s palpitation. It was a hot, sticky NYC June night.

For years tickets to NYTM always sold out. In 2010 in New York City, if you had a startup, you were probably presenting it to the crowd at NYTM.

I had just moved the year prior from the tech hot bed of San Francisco. Although you might think of the SF tech scene was larger, by the count of people who show up to meetups (which was a count of the wanna bes, quite frankly), the scene I encountered through the NYTM was the largest set of tech events I’ve ever seen.

In 2009, San Francisco was filled with engineers. There, Christian Perry and Cass Phillips had launched the widely successful SF Beta also on Meetup, also a monthly networking event. Distinct to the New York Tech Meetup, SFBeta operated audience-less. (Presenters just demoed to people around tables in an open room.)

Everywhere you looked in San Francisco, people were coding in cafés in laptops. You could see Google or Apple employees who got bussed down to Silicon Valley. (That had become very fashionable a few years earlier.)

I moved for work, and as an early Rails engineer (a highly in demand and sought-after specialty), I remember how distinctly rare the job market treated me and my skill (thus, rewarding me likewise).

The main event was probably 2 hours long. By its height — about when I intersected it upon moving to New York, it was, unarguably, the biggest deal in New York City tech.  Back then, to build a startup you started by writing code. First demoed it at the New York Tech Meetup and then hoped an investor would notice you.

The stage show had a keynote (usually by Nate Westheimer), and about 6 to 10 demos from New York City app developers and ‘startups.’ I put ‘startups’ here in quotation marks because these startups weren’t like the startups of today.

After a startup had presented, there would be a Q&A session. Inevitably, some uninitiated audience member would always ask how the start-up intended to make money — to monetize — their app. Nate Westheimer (the organizer) would immediately stop them. This question— how you would make money— was the ‘forbidden’ question. (I saw Nate literally strike down that question many times when asked by an audience member.) It was Nate’s belief that asking a tech venture how it was going to monetize prematurely was the wrong thing to do, and that the money-driven New Yorkers had to be kept at bay so that NYC could foster a thriving entrepreneurial community where tech could grow.

New York tech was growing, or so it felt. The old-guard monied elite of NYC were jealous of tech’s lure and wanted in. The Wall Street guys were there and asking How’s it gonna make money. Outside of Nate’s protected bubble of NYTM, it was the operative question on everyone’s lips: Is all this tech thing going to take off or is it a bubble?

Everyone was swimming in tech. The New York scene was filled and people who abstractly had other careers (usually finance bros) and wanted to break in. The after party, at a bar two blocks away— was probably the epitome of every ‘professional networking’ schmooze you’d expect. Most 20- and 30-somethings recently arrived in the city— everyone interaction felt transactional or self-promotional. Everyone had some aspiration to break into what felt like a gold rush. Nobody really thought about selling shovels.

These demos would be cool, sometimes broken (as they say is the live-demo curse), always scrappy. Their teams were small— a biz guy and a developer (almost always guys).

I can barely remember any of the companies I saw in any of these demos. (Of course, lots of big names did pass through NYTM — my intersection with it was only a few passing years over its long and large history.)

Anyone could build a startup. Facebook’s meteoric rise to the industry’s top “social media” platform was just a few years old— and it felt that at that time all you needed was a great idea, an email list, a prototype, and lots of enthusiasm.

Very few of the people I met actually were programmers.

Mostly people worked in sales, or marketing, or biz dev (this was before the formalization of what we today call ‘product management’). Part of this happened because of the Facebook effect itself.

Scoff Heiferman was the CEO and one of five co-founders of Meetup.com. New York Tech Meetup was just one of the many meetups that were spawned from the Meetup.com platform extraordinarily popular at the turn of the decade.

I will be the first to admit I was attracted to tech because of the rush it — to the feeling you’d get when you launched a product and it went viral. When you’d see your signups shoot up and you knew people were somewhere in their homes sitting on their computer screens using the software you had written. It gave me a rush: the asymmetrical power of it all. Here we were, small teams of developers, who could push out a business interaction so our website could transact with any number of people. It could scale up “infinitely” (obviously not, but it felt this way).

The word of the day — during the turn of the decade — was disruption.

So why did Scott Heiferman, the CEO & founder of Meetup.com, smash an iPad at the tech meetup during what might have been that bubble’s peek?

In the actual year 1984, Apple Computer released a Superbowl ad that would become the most iconic advertisement of all time.

Rows and rows of men sit mindlessly starting at a huge screen, controlled by some faceless overload projected onto the screen.

The image referenced the book 1984 by George Orwell.  In Orwellian 1984, a dystopic society is controlled by a totalitarian state led by a character referred to as “Big Brother.”

Apple Computer proclaimed in 1984 that— because of the introduction of the Macintosh computer — the future wouldn’t be like the book: a society of placated, pacified people sitting mindlessly staring at screens. They said: “See why 1984 won’t be like 1984.”

Today, when an industry becomes so powerful its controlling interests start abusing their power, we call it “Big” — like Big Pharma or Big Tech.

What Scott Heiferman was saying when he smashed a brand new iPad throwing away his $800 was: “Get off your phone!” This new tech is great, but at what cost? What were we giving up, was his question.

To quote the great Carl Sagan (and perhaps my favorite Matthew McConaughey line of all time): “I don’t fear technology, I fear the men who deify it at the expense of human truth.”

As a career programmer and lifelong coder, I’ve been thinking a lot about how code just kind of ‘exists.’ It lives here on our laptop or on some ambiguous ‘server’ in the sky. As developers, we know it runs because of the artifacts it leaves us: logs, emails, database records, messages.

The primary driver of this slice of the ‘tech industry’ in America is capitalism and the relentless pursuit of control.

Sadly, I no longer think the industry is particularly driven by innovators.

My friend Justin Falcone — someone I met at the Brooklyn Javascript meetup just before the pandemic— asked on Twitter the other day:

When I started in tech we saw the future of our young profession like law or medicine— destined to be a professionalized class in society. We thought we might get a “collar color”— like blue for working-class or white for the professional class.

Instead, capitalism rushed and commodified tech.

Computer programmers are in this class struggle with the capitalist class — the capitalists have tried to flip the script on disruption. They’ve tried to convince the world that it is their money, and access to it, that gives them the power of disruption.

If you were a young developer today and saw all these huge tech companies and hugely funded start-ups it’s no wonder you’d see disruption in someone else’s court.

Are programmers merely the technicians operating the machinery that belongs to the disruptor class? Or is the power we have to build software itself disruptive?

The paradox— to me— is obvious.

I believe the latter, but I also believe that the delusions of the industry are laid on so thick right now it’s difficult to understand.

The great era of tech Meetups seemed to die — and certainly the pandemic didn’t help. Now, a significant amount of what I see on Meetup.com are coding Bootcamps offering free introductory lessons. Gone are the ‘great tech meetups’ of engaged programmers who came together around a common passion.

(No disrespect to the many good meetups still being organized today — some by me! — but attendance and engagement at these still pale in comparison from my memory of the heyday.)

All of the people I mentioned in this story are, in fact, real individuals whom I met at different Meetups.

I predict this is just a cycle. The disruptors become established. They’ll try as much as they can to hold onto that power — that’s what all capitalists do — but in their blindness for control they will lose sight of the cycle of it all. It’s called a blue ocean because your technical innovation allowed for a new ocean: one that didn’t exist before.

This is the only way disruption has ever happened. 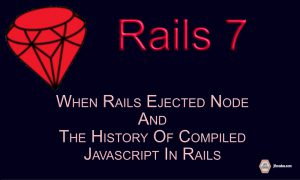