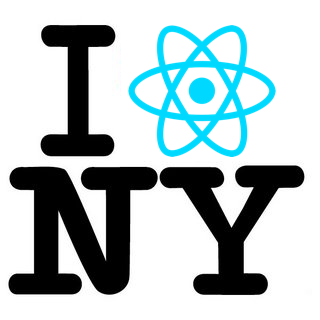 The “Wix Playground” occupies a brightly lit warehouse across from the massive Whitney Museum on Gansevoort Street, just steps away from Manhattan’s scene west side highway and the Hudson river. There must be about 60 to 80 people at this meetup.

The air of conversation seems friendly. People seem to know one another and chat quietly before the presentations begin.

I can overhear two guys talking about being programmers in Germany, working hours, the difference between work in America and Europe, and the supply and demand for developers. I can’t quite make out what they are saying exactly. They are discussing pay, something about something compared to pay in Germany. “If you think the bubble is about to pop,” I hear one of them say. Job offers, insecurity about work solvency.

Josh, a Developer Advocate at Wix, acts as our host & MC for the night and opens the show. He begins by thanking the sponsors: GDGNYC, Devs on Wix, React Robins, Catchpoint, and Real World React.

Mel, from Etsy, gives a plug for the NY Web Performance Meetup, one of the most consistent and continuously run meetups in NYC since 2009, “Meet for Speed.” The Meet for Speed claim to fame is that you can bring your website or anyone’s website to the meetup, and they will interactively help debug your performance issues using the widely popular webpagetest.org tool. You can find many of their previous talks on their Youtube channel.

Stoyan Stefanov (LA), author of several widely known Javascript books, including React Up & Running and Javascript Patterns, gives the first talk. He says, only somewhat tongue-in-cheek: “I wrote a book and then did an update last Christmas, so it is already out of date, so don’t buy it.”

He starts with a slide profiling the top 10 Single Page Apps (SPAs) and how bloated they are regarding memory leaks. “Everybody leaks” Stefanov says, suggesting an industry-wide problem.

Fuite is a tool used to identify and diagnose memory leaks in Javascript. (A project created out of France, ‘fuite‘ is French for ‘leak.’)

You can perform a “DIY” leak investigation the tedious way: examining your heap snapshot when the page loads, when you act, and then when you perform another action (for example, rollback the first thing you did). This tells Javascript to garbage collect. You know you have a memory leak if your heap size remains high after garbage collection.

Doing it the DIY way is tedious and tricky. Fuite is one of two tools Stefanov discusses for debugging leaks. The other tool is Memlab (by Meta), which uses Puppeteer to snapshot the heap as the interactions are orchestrated. (Puppeteer allows scripted control of your site.) However, Stefanov says that the Puppeteer syntax is cumbersome, so he created a tool enabling you to record your interactions by clicking around in the browser and output that recording to a Puppeteer script. He says he has created is brand new tool over the weekend and that it was “rough” and needed some polishing but worked well as a proof-of-concept. You can find it on GitHub here: memlab-recorder.

Two developers who had come all the way from Tel Aviv give a talk on their new tool Codex, a visual IDE for React. They talk about “the hardships of modern UI.” Kenet stars by saying “Our day-to-day isn’t as streamlined as it could be.”

Codex (their product) is a visual IDE — a visual edit similar to what you might find in an Adobe product — designed to build React components written in Typescript. Importantly, it has no intermediary language or extra language layer to record and process your code— the visual UI reads and writes directly to your underlying React components as source code.

How can it do this? Well, for one, it must have a basic understanding of the kind of CSS you are using, and it supports components written with CSS and CSS modules, SCSS and SCSS modules, Stylable, and Tailwind.

Shershov then takes us through a basic demo involving making a simple change to an existing React component.

Ben Dunphy, from San Francisco, gives an energic talk about what happened for React in 2022. Dunphy organizes Real World React, the only self-organized React conference.

Among the honorable mentions in his presentation was the sale of Remix to Shopify in October, and the introduction of the TanStack router for React, a fully typesafe router for React that support based on tRPC, a framework agnostic tool that is “like using an SDK for your API’s server code.”

However, the primary thing Dunphy talk covers is the much-anticipated and long-await React Server Components, and he started with a brief history lesson: In December 2020, RSC (React Servie Componets) was promised by the React teams as the future. With Server Components, your React component can be rendered on the server (or on the edge network for distributed systems like Facebook’s). It promised data fetching “at the edge,” within the component level.

After the much-ballyhooed announcement, 2021 “followed with crickets” (silence) from the React core team about this significant change in the ecosystem.

In March of 2022, React 18 was released. But React Server Components were still in development at Meta, so they weren’t included in React 18.

Fast forward to July 2022, the NextJS team previewed React Server Components in the release of their framework, NextJS 13. In October 2022, Next JS released version 13 with RSC support built-in support. In announcing it at a conference, one of the React core team members named Andrew Clark controversially said, “Next JS 13 is the real React 18” which led to outcries of nepotism and favoritism from those outside the small ecosystem that makes up the React core team members. He later went on to explain this statement, and importantly, Dan Abramov (also React core team member) explained in a lengthy Twitter thread some of the reasons why NextJS, not Meta, was the first to release RSC to the ecosystem.

While the goals are easy to understand (e.g. provide an idiomatic data fetching solution), it turns out that many different concerns are interconnected. how you do data fetching is related to routing, code splitting, streaming, loading indicators, hydration, bundling, and so on.

In particular, some of the challenges of RSC involve first-class support for async/await. As well, the offering builds on React-suspense.

Now, with first-class support for React Server Components default for Next JS apps.

She goes to discuss her experience paring in her company, which she tries to make happen at least several hours per week in her job.

When asked how to find a mentor, Powell quipped, “If they say no, you’re in the same place.”

On mentorship, LaNice suggests asking your mentors for a consistent reoccurring meeting.

What is RVM Big Sur? RVM stands for Ruby Version Manager and is a tool used by Ruby developers to...

Last week that Apple said that the new iTunes 10 logo has dropped the CD. This logo change received much...